Republican Tom Schweich has been sworn in as Missouri’s new State Auditor.

He was introduced by former U.S. Senator John Danforth, who praised 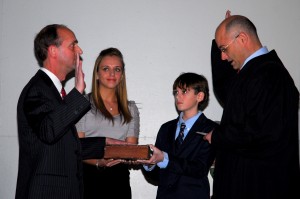 Schweich for his hard work as a diplomat and as his chief of staff, once at the United Nations.

Schweich will announce his staff Wednesday, but said he’d keep many of the Auditor’s professional staff on board, including some who have worked for years under both Democrat and Republican state auditors.

Schweich, 50, was joined by his wife and children as he was sworn in by Missouri Court of Appeals Judge Gary Gaertner Jr.