The Missouri Agribusiness Development team has been a presence in Afghanistan since 2007; and it has suffered its first casualty.

Sgt. 1st Class Robert Pharris was from Seymour, Missouri. He was in the Army and Army National Guard between 1981 and 1997; then re-joined the Guard in 2008. He was 48 years old, and had been in Afghanistan as a member of the Agribusiness Development team since June.

“It’s especially difficult when we know that their mission is one of peace and working with the Afghan people there to help build things and not destroy things,” said Missouri National Guard Major General Stephen Danner.

Danner says while those that are deployed know the risks involved; this is still a shock.

“The first thing that came to my mind when I heard that one of our Ag team members had come into harm’s way was, ‘Was this an attack on one of the agricultures team’s convoys or missions?’ The answer to that was no,” Danner said. 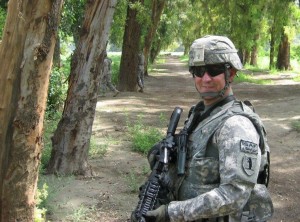 “Sgt. Pharris was assigned to another unit as what we call a liaison officer at the time. For security reasons I’m not going to go into details. But I’ll just say he was not with the agriculture development team at the time,” Danner said. “He was a member of the Guard family and it’s just a tragic loss and we feel that as a Guard family. We certainly extend our condolences to the family of Sgt. Pharris. He was an excellent NCO and leader.”

Pharris’ son, a marine, has also served in Afghanistan.

Pharris was killed by an improvised explosive device in Nangarhar Province. A soldier from the state of Louisiana also died in the attack. The group in Afghanistan now is the fourth team the Missouri Guard has sent to help Afghanistan’s farmers develop a more modern agricultural economy.  Pharris was the unit’s specialist on sheep and goats.  Pharris’ farm in southwest Missouri raises sheep and goats.

He was featured in an article published in Blackanthem.com Military news on November 29.