Head coach Mike Anderson got what he was hoping for against a lesser opponent. “From a talent stand point, they were outmatched, but this is one of those games you worry about,” said Anderson. “Our guys have been so amped up in terms of playing teams and now you bring in a team that has nothing to lose and everything to gain. I thought we did better in the second half. When our guys came out, they sort of went through the motions, so it was a game you kind of worry about your guys – can they get up for North Alabama? We got some quality minutes for other guys and had two guys with double-doubles.” 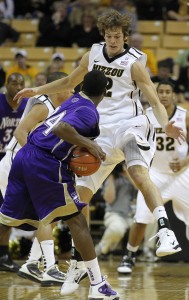 Justin Safford and Laurence Bowers each added 16 points. Bowers also had 11 rebounds and freshmen Ricky Kreklow had a double-double of 10 points, 10 rebounds in 20 minutes of quality play.

It was the 14th win of the season and that mark is itied for the program record of best non conference mark in history. The 1989-90 team also won 14 of 15 non-conference games

The win is also the Tigers’ 68th over the last two plus seasons. The Tigers open Big 12 play at Colorado on Saturday, riding a nine game win streak.

Previous Post: « Ft. Hays State too much for Central Missouri
Next Post: Conservatives rally in Rotunda on first day of session (AUDIO) »