You are here: Home / Legislature / Conservatives rally in Rotunda on first day of session (AUDIO) 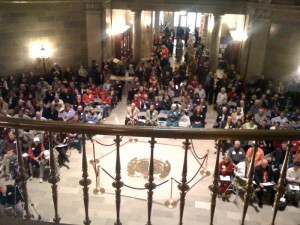 The 'Consent of the Governed' rally

About 200 people showed up for a rally in the Capitol on the first day of the new legislative session.

It was called the ‘Consent of the Governed’ rally, a nod to a line in the Declaration of Independence. It was planned by Tea Party supporters and other similar groups. Freshman Senator Brian Nieves of Washington was one of the dozen speakers that fired up the crowd.

“This is my ninth… first day of the legislature, and the first time that I’ve seen the halls filled with patriots and people that are willing to get together and make sure our government works right,” Nieves said.

Nieves said he was impressed at the crowd of nearly two hundred that showed up for the rally. He told them they need to continue to ‘show up’ at the capitol, at county and city level government meetings and at the polls.

Representative Paul Curtman of Pacific explains how the idea ‘consent of the governed’ should work.

“If we want our government to govern by our consent, the only way they can do that is if they know what we want, what we are thinking, where we stand on the issues. That means it is our duty, we have this overwhelming responsibility to be as engaged as possible in our own government,” Curtman said. 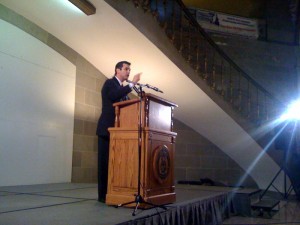 Former Representative Ed Emery was another one of the speakers. He said while everyone there wanted to work together, they’ll have to acknowledge they’ll have different roles.

“Some of you are going to be spending a lot of time studying bills, researching candidates, looking into the process of legislating here in the Missouri legislature. Others of you just simply cannot, your lifestyles will not tolerate that. So you have to look to those who do spend that time for your help and those who do that have to reach out as far as you can. But there is something that we can all do, that every one of us can do, and that is to vote for our elected representatives,” Emery said.

Emery especially stressed the need for participation in primaries, which he says often gets overlooked despite their significance. Legislatively, he’d also like to see some rule changes to lessen the power of the rules committee, and eliminate the pre-selection of the Speaker of the House. He also decried the use of omnibus bills.

Other speakers at the rally spoke about issues like opposition to federal health care reform, support of a fair tax, and the need for rule changes in the state legislature.

Nieves also warned that the conservatives who helped make a difference at the ballot box recently, need to be cautious.

“We have become a force to be reckoned with. But guess what? In an organization, in any movement, as the numbers increase so does the potential for division. We cannot become divided. We have got to find those points upon which we agree and concentrate on moving forward there,” Nieves said.