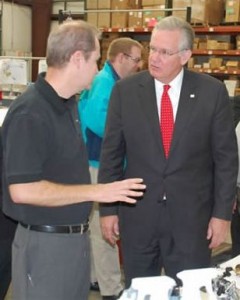 Governor Nixon might have had many priorities in mind when he took office two years ago, but two pressing issues have been at the forefront of his administration.

Nixon says the recession and its after-effects have dominated his first two years in office.

“That and the budget have taken and continue to take, because of their importance, a significant amount of time,” Nixon tells the Missourinet.

Nixon inherited a state budget in free-fall, reeling from the recession of 2008. Money from the federal government helped forestall deeper budget cuts. Still, Nixon withheld $900 million from the state budget in Fiscal Year 2010, $400 million from the federal budget stabilization fund. He withheld $301.4 million in FY 2011, the current budget year. Those withholdings came on top of cuts approved by the legislature the past two sessions.

Nixon is proud of the steps made the past two years to improve Missouri’s economy, rocked by the recession.

“We’ve been able to turn this economy around and begin moving forward,” Nixon says.

Some, though, would argue that the state economy hasn’t turned around.

“I think we’re seeing movement forward. Clearly, we would like to go faster,” Nixon says.

The governor points to a number of economic development announcements made this year. The biggest came from IBM, which announced it would build a technology delivery center to Columbia which would eventually create 800 jobs. Sabreliner Corporation plans to expand its Perryville Municipal Airport facility and add 400 jobs. Unisys has announced a new facility for St. Louis, expected to create 300 jobs. Dupont Pioneer plans to construct a soybean seed production facility in New Madrid County, which will create 50 jobs once up and running.

“And that’s clearly an uptick from where we were two years ago,” according to Nixon.

Nixon says his administration has worked a lot on the basics to help the economy emerge from recession, such as providing more money for training. He says, at times, economic development boils down to three yards and a cloud of dust.