“Winston on Westminster’s Campus” places more of the National Churchill Museum’s collection into public view at the Central Missouri College. 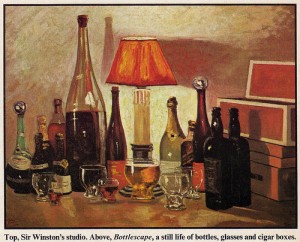 Winston Churchill was a leader, a diplomat, a writer, and yes, an artist. In addition to some of the popular iconic photographs of Churchill — such as the one of him throwing the “V” for “Victory” sign — some less known photos of him are on display at Westminster College in Fulton. Curator Liz Murphy says one of her favorites is a photo of him helping judge a goat show.

Reproductions of three of Churchill’s paintings are also on display. Murphy says this exhibition will lead to more art and student involvement in the future.

Murphy says the project allows the Museum to display some of its pieces from behind the scenes, and using Westminster College as the exhibition space is a way for both institutions to showcase their relationship with one another.

Churchill painted and drew dozens of pieces of art in the early 1900s. Viewers can see reproductions of “Bottlescape,” “Palladian Bridge,” and “Cork Trees at Mimizan.” There are two originals at the museum.

The exhibition is on display through December of 2011.

The public in invited to view the works, which are scattered throughout campus, which was made possible through a grant from the Helen S. Boylan Foundation.

The items displayed in the Coulter Science Center are three oil paintings by Jack Lawrence Miller, a bronze bust of Churchill, a bronze bust of President Harry Truman and ten photographs from the Mahoney collection.

Visitors to Newnham can view a reproduction of Churchill’s painting “Palladian Bridge” and a bronze bust of Churchill.

Another bronze bust of Churchill is on display in Westminster Hall as well as a reproduction of Churchill’s painting “Cork Trees at Mimizan.”