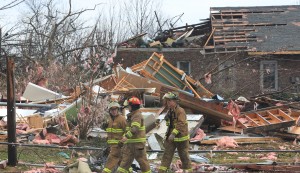 Gov. Nixon has signed an executive order to declare a state of emergency in Missouri in response to severe weather that began late last night. The weather system has involved tornadoes and high winds in communities across Missouri.

Personnel at the State Emergency Management Agency have been communicating with local law enforcement and emergency responders and tracking the storms as they have moved across Missouri. This order from the Governor follows on those initial steps by activating the Missouri State Emergency Operations Plan, which allows state agencies to coordinate directly with local jurisdictions to provide emergency services.

Initial reports indicate that these storms have resulted in at least three fatalities, multiple injuries and damage to homes, buildings and property, including at Fort Leonard Wood in Pulaski County. Earlier this afternoon, Gov. Nixon spoke personally with Major Gen. David E. Quantock, commanding general of the Fort, to offer the state’s support and assistance.

“The state of Missouri is ready to provide whatever resources are necessary to help with rescue, recovery and public safety operations in the wake of these deadly storms,” Nixon said. “As cold weather settles over Missouri later today, a quick and coordinated response is vital to protect lives and property. By working together, we will ensure that our emergency responders have the tools they need to keep Missourians safe and to help families start to recover.”