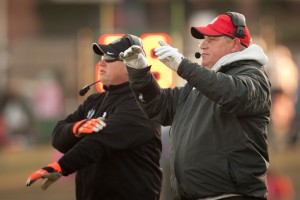 The 2007 AFCA Assistant Coach of the Year, Bostwick has been Tjeerdsma’s defensive coordinator and linebackers coach since the duo’s arrival in 1994. Together they won 12 MIAA championships, three NCAA championships and led the Bearcats to seven title game appearances in the last 13 seasons.

“I’ve been a coordinator for 26 years and if I was ever going to be a head coach, this is where I wanted to be,” said Bostwick. “It would be a challenge for anyone to try to walk in Mel’s shoes, but I’m excited for it. It’s what I’ve wanted, it’s why I’ve stayed here and here it is.

“The Bearcat Paw represents a lot to Northwest faculty, alumni and past players and I want to uphold the traditions of what it has stood for the last 15 years. Our work ethic, commitment and preparation will not change.”

Year-in and year-out, Bostwick has continuously produced one of the top defenses in the nation. The Bearcats have the led the MIAA in scoring defense in each of the last five seasons and in total defense in two of the last three.

The Bearcats have finished in the top 10 nationally in stopping the run three times in the last five years, including 2006 when the team set a program record by allowing just 75 rushing yards per game. Only eight individuals have posted 100 yards rushing against Northwest in the last 77 games dating back to 2004.

“Scott Bostwick has been instrumental in the rise and continued success of Northwest football,” said Northwest director of athletics Wren Baker. “He is just as committed to the personal development and academic success of his players as he is to winning football games. We are extremely proud to have Coach Bostwick be the next head coach of the Bearcats.”