A Missouri veteran has been honored by the Country of France, the State of Missouri and the U.S. 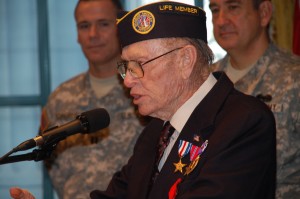 Gov. Nixon today presented Perry Coy, a World War II veteran of Jefferson City with the highest honor given by the French government for heroism. Coy was also awarded the Silver Star Service banner and a certificate from the Governor.

Coy was named as a Knight of the Legion of Honor for his actions during the liberation of France during the war, in which he says he was part of the “second wave” to invade the beaches of Normandy on D-Day. 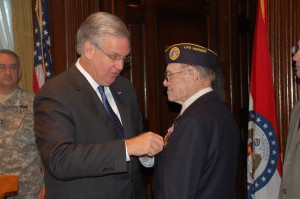 Coy says he was dropped off in water over his head in the English Channel and had to drop his gear to make it to shore. He says he picked up supplies from those who were less fortunate than he and didn’t make it. Those who died in battle are the true heroes he says, dedicating his honors to them.

He says because of their actions, and those who survived, French is enjoying freedom still today.

During his service in France and Germany in 1944-45, he was awarded three Purple Hearts for combat wounds, the Bronze Star, and the Silver Star — the nation’s third-highest military award. 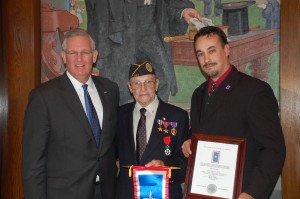 Because of his combat injuries, also received a Silver Star Service Banner and Certificate from the Silver Star Families of America — is a national charitable organization established by Steve and Diana Newton of Clever, Mo., to honor wounded troops and their families.

Perry Coy is the second veteran from mid-Missouri to receive the Legion of Honor decoration in the past three months; in September, the Governor presented the award to Gilbert Pritzel of Holts Summit.

Tuesday is also “Pearl Harbor Remembrance Day” in Missouri in honor of the sacrifice of American citizens during the 1941 Japanese attack that precipitated the United States’ entry into World War II.

Flags at state and local government buildings in Missouri are being flown at half-staff.

Previous Post: « Honors rolling in for Missouri State lineman
Next Post: Three months of recovery ahead for KC officer »