Now the Tigers wait. Did Mizzou do enough to earn a spot in the Orange Bowl? Will it be a return trip to Dallas for the Cotton Bowl? All they can do is wait and see. The Tigers took care of business Saturday afternoon at Arrowhead Stadium never giving their rival Kansas Jayhawks much of a chance in a 35-7 win. Mizzou finishes the season 10-2 overall and 6-2 in the Big 12 North.

Missouri dominated the game on the ground gaining 218 yards of their 397 total from rushing. DeVion Moore had two touchdowns and T.J. Moe added a first quarter touchdown as well. Blaine Gabbert got in on a one yard sneak and Kendial Lawrence added a 31 yard score. In all, Mizzou scored five times on the ground as KU tried to take away the passing game. For the most part they were successful in stopping the passing game, as they picked off Gabbert twice, but they couldn’t answer Mizzou’s rushing attack. Blaine finished 16 of 26 for 179 yards. One of Blaine’s picks came in the second quarter at the goal line in triple coverage that would have put MU up 28-0 at the time. 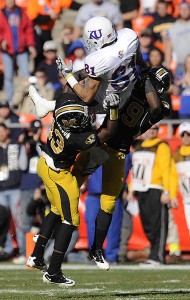 Gabbert was picked off again in the third quarter which KU turned into their only score, a 13 play drive that covered 48 yards. Other than that, the Missouri defense harassed Union, Mo. native Jordan Webb all game. He was just 7 of 20 for 45 yards and he was picked off twice. Mizzou came up with three interceptions and five sacks today.

According to Mizzou’s media relations, the 141 total yards given up is the lowest against a conference opponent in the Big 12 era.

Tigers score on the opening drive going 69 yards in 10 plays capped with a three yard run from DeVion Moore. Mizzou converted on three, third down conversions.

Mizzou forced a three and out, thanks to two sacks on KU’s opening drive.

On the Tigers’ second possession, Mizzou worked short field, going six plays, 36 yards, finished by a two yard touchdown run from T.J. Moe. Moe was the 8th player to rush for a touchdown this season. The last time that happened was 1970.

KU was wide left on a 42 yard field goal attempt.

After Missouri stopped KU on a 4th and four, Missouri used four run plays to go 59 yards for their third score of the game. Kendial Lawrence scored on a 31 yard touchdown run to put the Tigers up 21-0.

Late in the first half, Gabbert was picked off after throwing into triple coverage at the one yard line.

After stopping KU on their first play, Gabbert got picked off and KU methodically went 13 plays, for 46 yards in 5:53, breaking the shutout on a three yard run from James Sims. That ended a 100 minute, 29 second scoreless streak.

The Tigers answered KU touchdown with a drive that went over five minutes to make it a three score game late in the quarter.

The Tigers added their fifth touchdown of the game on Moore’s five yard run to cap Mizzou’s 10-2 season.