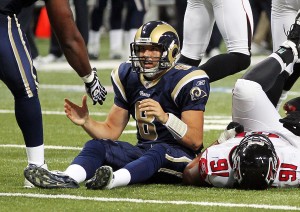 Sam Bradford had a pair of touchdown passes for the Rams and set an NFL rookie record with 169 consecutive passes without an interception. The streak ended when former Missouri Tiger William Moore picked off a shovel pass at the two yard line with under three and a half minutes to play ending a drive that would have put the Rams within distance of a win.

After the game, Moore said of his 12 yard return. “I wish it would have gone 98 (yards), but overall it was just a huge play.” The loss ended the Rams’ four-game home winning streak.