You are here: Home / Crime / Courts / Seven officers honored for extraordinary acts of bravery and heroism

Gov. Nixon today presented the Missouri Medal of Valor to seven public safety officers from across the state for extraordinary acts of bravery and heroism that saved lives during 2009. Among those receiving the Medal of Valor was the first female recipient, Officer Isabella Lovadina of the St. Louis Metropolitan Police Department. 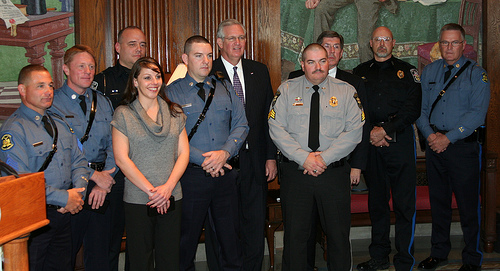 The presentations of the state’s highest public safety award during a ceremony in the Governor’s office in the Capitol were also attended by the officers’ family members and colleagues from their departments. Nixon was joined at the ceremony by Department of Public Safety Director John M. Britt and Col. Ron Replogle, superintendent of the Missouri State Highway Patrol.

“These seven officers carried out their acts of valor without regard to their own safety and well-being,” Nixon said. “Their actions saved the lives of their fellow citizens, and I thank them for their extraordinary service to Missouri and for the outstanding examples they set.”

The newest Medal of Valor recipients are:

· George Ball, Dent County Sheriff’s Office and Steve Lawhead, Fort Leonard Wood Police Department (now an officer with the Waynesville Police Department) – On Jan. 31, 2009, Sgt. Ball and Lt. Lawhead both responded when a woman and her dog fell through the ice and into a lake in Dent County. Neither officer was scheduled to patrol that day and both were in civilian clothing, but when they heard the emergency call they immediately responded.

Arriving on scene before firefighters, they found the woman submerged up to her head in the frigid water, clinging to the edge of the ice about 50 feet from shore. With no rescue equipment and without regard for the danger of falling through the thin ice themselves, the officers carefully crawled along the ice to the woman and pulled her from the water. The victim was unable to move because her legs were numb. With the ice cracking around them, the officers placed her on blankets and quickly dragged her safely to shore, rescuing her Labrador retriever as well.

· Cody Dunfee, Troop A, Missouri State Highway Patrol – On June 30, 2009, Trooper Dunfee accompanied Bates County Sheriff’s deputies as they executed a search warrant at a rural house, looking for a man wanted on two outstanding attempted murder warrants. As part of the initial entry team, Trooper Dunfee utilized his SWAT training to begin clearing rooms in an attempt to locate the suspect. The suspect suddenly opened fire with a rifle, striking the trooper in the lower abdomen, but the bullet was stopped by the trooper’s ballistic vest. Trooper Dunfee returned fire, hitting the suspect and forcing him to retreat to another room. Remaining calm under extraordinary circumstances, Trooper Dunfee was instrumental in guiding the safe withdrawal of the officers. The gunman was later determined to have taken his own life. Trooper Dunfee’s presence and actions under fire prevented injury or loss of life to other officers.

· Larry Ellard, Warrenton Police Department – On May 12, 2009, Sgt. Ellard responded to a report of a suicidal man sitting on the edge of the Highway 47 overpass at Interstate 70. The man was precariously balanced on the six-inch wide guardrail, leaning forward to keep from falling 30 feet to the busy interstate below. As the man sobbed uncontrollably, Sgt. Ellard attempted to engage him in conversation and used the loud traffic noise as an excuse to move closer. Sgt. Ellard leaned in closer to listen each time he asked a question. When the man said he was tired of living, suddenly stopped speaking and clenched his fists, Sgt. Ellard seized the opening, grabbed the man’s arm and managed to wrestle him from the edge of the overpass. Sgt. Ellard acted despite the danger of possibly falling to the interstate below with the desperate and distraught subject. The man was taken to a hospital and admitted for psychiatric treatment.

· Chris Harris, Troop F, Missouri State Highway Patrol – On May 5, 2009, Sgt. Harris joined the pursuit of a heavily armed motorcyclist who had made threats against public officials at the Osage County Courthouse and was firing shots at Osage County Sheriff’s deputies. Sgt. Harris was closing on the pursuit when he heard that a deputy’s car had been hit. He then spotted a deputy’s patrol car stopped in the middle of westbound U.S. Hwy. 50 and had to take evasive action to avoid a crash, temporarily driving off the roadway. Back on Hwy. 50, Sgt. Harris neared the motorcycle and, seeing that the subject had a gun, took over as primary pursuit vehicle on the right. With the armed motorcyclist traveling more than 70 miles an hour and approaching Jefferson City, Sgt. Harris knew he had to move to end the pursuit to protect motorists and other officers. Sgt. Harris struck the rear of the motorcycle with the front of the patrol car. The driver fell off the motorcycle and then took his own life with a handgun. An investigation revealed the subject had two handguns, a rifle, shotgun and more than 700 rounds of ammunition.

· Isabella Lovadina, St. Louis Metropolitan Police Department – On Oct. 5, 2009, Officer Lovadina, who was off duty, had just left the St. Louis residence of an acquaintance with a friend when they were approached by two armed men and forced back into the residence.

The gunmen’s intent was a home invasion-robbery. They threatened and terrorized the victims, including several young children, for more than 20 minutes. Several times the gunmen pointed their weapons to the victims’ heads and stated they would kill them. After robbing the victims, the gunmen directed them at gunpoint toward the basement doorway. Officer Lovadina believed that the victims were in imminent danger of being killed. Despite the fact that she was unarmed, she attempted to disarm one of the gunmen to protect the other victims. As she struggled valiantly with the gunman, she was shot several times and critically wounded by the second gunman, who also fired at two other victims, killing one of them. The gunmen fled the residence, but were later captured.

· Timmy Shoop, Troop B, Missouri State Highway Patrol – On May 23, 2009, Cpl. Shoop received word of a one-vehicle accident in Chariton County in which the vehicle left U.S. Hwy. 24 and traveled into the Middle Fork branch of the Chariton River. The number of occupants was unknown. The SUV had floated about 200 feet downstream and only the roof was visible when Cpl. Shoop arrived on scene. Cpl. Shoop entered the river, fighting the strong current due to recent rain, and reached the vehicle. Because the vehicle was submerged and the water was so muddy, Cpl. Shoop had to swim underwater and then, without regard for his own safety, enter the vehicle to find out if anyone was inside. He managed to find a man in the front passenger seat and pulled him out of the vehicle. As medical personnel tended to the victim, Cpl. Shoop again risked his life by reentering the vehicle to make sure there were no other victims. Emergency medical personnel were able to regain a pulse for the victim. He was transported to a hospital but ultimately did not survive.

“There is no higher calling than serving and protecting the public, and these courageous public safety officers exemplify the character, resourcefulness and selflessness of Missouri’s public safety officers,” Gov. Nixon said. “I hope all Missourians understand the tremendous sacrifices the officers and their families make each day to strengthen our communities.”

The Medal of Valor is awarded annually by Missouri’s Governor after recommendations are submitted by the Medal of Valor Review Board. State statute authorizes up to seven medals each year. Recipients must be persons serving a public agency, with or without compensation, as a firefighter, law enforcement officer or emergency personnel.

The nominating form states the Medal of Valor is awarded “to a public safety officer who has exhibited exceptional courage, extraordinary decisiveness and presence of mind, and unusual swiftness of action, regardless of his or her own personal safety, in the attempt to save or protect human life.” State and local corrections, court and civil defense officers are eligible.

Nominations are now open for acts performed during 2010 and must be received by March 31, 2011. The nominating form is available on the Missouri Department of Public Safety Web site at www.dps.mo.gov/documents/MedalofValorForm.pdf