The vaccine cocktail that people are getting this year to ward off the flu contains protection against the virus that took the U.S. by storm last year — the H1N1 virus, swine flu. The other viruses include H3-N2 and influenza B. 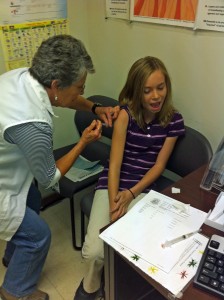 The Missouri Department of Health says there are three viruses targeted with this year’s round of flu shots, based on what experts know is headed this way from other countries.

Spokeswoman Jaqueline LePine says in years past, the Centers for Disease Control was urging certain high-risk groups to get vaccinated for influenza, such as the elderly or chronically ill. She says that’s changed — this year, everyone over the age of six months is being urged to get the flu shot.

LePine says flu season typically runs from October through May, and that it’s not too late to get vaccinated, even into December.

According to the World Health Organization, H1N1 — swine flu — has killed more than 18 thousand people since it appeared in April 2009. That’s about 4 percent of the annual influenza deaths.

Find out where to get your shot with the Flu Shot Locator.