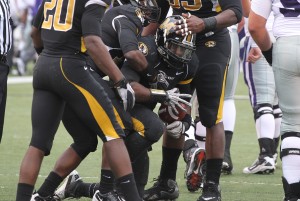 Missouri Tigers Jacquies Smith is surrounded by teammates after recovering a fumble on the one yard line against the Kansas State Wildcats in the second quarter at Faurot Field in Columbia, Missouri on November 13, 2010. UPI/Bill Greenblatt

It was only fitting that on Senior Day, this class would tie the Missouri football record for most wins by a class, at 38, following the Tigers 38-28 win over the Kansas State Wildcats on Saturday at Faurot Field. The win moves the Tigers to 8-2, 4-3 on the season.

Missouri’s defense forced four turnovers and held the Wildcats to just 43 total yards in the third quarter while the Tigers turned a 21-14 halftime lead into a 31-14 lead. Turnovers accounted for basically a 17 point swing.

Kansas State was driving late in the first half as quarterback Carson Coffman was 3 for 3 for 48 yards on a two minute drive. He drove the Wildcats to the one, but on first and goal, fumbled the snap as the Tigers kept KSU out of the end zone and preserved their seven point lead.

Then in the third quarter, a blind side sack by Aldon Smith caused Coffman to fumble the ball and Jacquies Smith picked it up and ran 53 yards for a touchdown. On KSU’s next possession, Carl Gettis came up with a fumble recovery and turned that into three more points.

For the first half, most of the offense from both teams came on the ground. I was really impressed with the play calling for Missouri as they kept KSU off balance all game. There were several straight runs by Blaine Gabbert, James Franklin ran a couple of plays at QB and the Tigers called a couple of end around plays. One resulted in a 20 yard run from T.J Moe and another resulted in a nine yard touchdown run by Jerrell Jackson who walked in for a score. 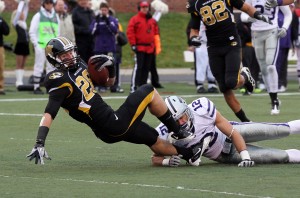 Missouri Tigers T.J. Moe gets past the grasp of Kansas State Wildcats Ty Zimmerman for a touchdown in the first quarter at Faurot Field in Columbia, Missouri on November 13, 2010. UPI/Bill Greenblatt

Moe also caught two touchdown passes, the first a nice effort to not touch the ground before reaching the ball past the goal line on a 25 yard pass from Gabbbert. Moe added another TD early in the fourth quarter.

What the strong running game did, was open up the passing game. Gabbert got picked once in the third quarter, but for the most part he was very efficient and very accurate. He hit Moe on that 25 yard touchdown. He also found Jackson on a 20 yard sideline pass for a first down with a pass right on the money. In the second half, into a 20+ mph wind, Gabbert laid one right on the money to Rolandis Woodland for a 51 yard completion.

The Tigers had trouble containing KSU’s other quarterback Collin Klein who had great success running in the first half. He replaced Coffman and between Klein and tailback Daniel Thomas, the Wildcats were able to match Mizzou’s first two touchdowns.

Klein rushed 18 times for 166 yards while Thomas added another 66 yards and two scores. The Tigers made some second half adjustments and basically took Klein out of his game by shutting down his run attack on the Wildcats’ first two possessions of the third quarter.

I was really surprised that KSU coach Bill Snyder didn’t just stay with Klein. He was on the field for all three of their touchdowns. Meanwhile, Coffman was on the field during several miscues.

Tigers go for it on 4th and five from the K-State 29 and come up short turning the ball over on downs. A few plays before that, James Franklin came on for one play at quarterback and rushed for 17 yards up the middle to the K-State 33.

T.J. Moe picked up 21 yards on an end around that gave Mizzou a first down at the K-State, but a false start backed the Tigers up to 29. On a third and 10 from the 24, Gabbert found Moe who was ruled down at the one, but replay confirmed Moe got into the end zone to give the Tigers a 7-0 lead on a seven play drive covering 66 yards.

Two plays into the quarter and the Wildcats scored on a one yard TD run from Daniel Thomas. Their drive covered 41 yards in five plays with 35 yards coming from Klein.

The Tigers answered the Wildcats drive with a 7 play, 70 yard drive capped by a 32 yard run Gabbert. The offensive line sealed everything off to the right, opening up the middle of the field and Wes Kemp served up a pancake that helped Gabbert get the extra couple of yards.

K-State answered with an eight yard play covering 84 yards. The drive was kept alive by two, 36 yard runs on third down. One coming from Klein, the other Thomas, who scored his second rushing TD of the game with 7:30 to play in the half.

The Tigers wasted no time going right down the field on an eight play drive of their own to make it a 21-14 game when Jerrell Jackson could have walked into the end zone on an end around. Highlights of the drive included a 20 yard pass from Gabbert to Jackson. 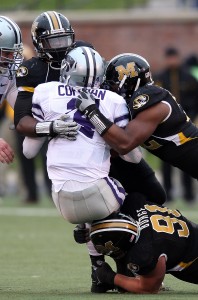 With no timeouts and the ball at their 46, K-State reinserted Coffman at quarterback who threw three passes to get the Wildcats down to the one with :20 to play. Coffman then fumbled the snap on first and goal from the one.

Aldon Smith hammered Coffman near midfield on a blind side sack. Coffman fumbled and the ball was picked up by Jacquies Smith who returned it 53 yards for a touchdown with 5:34 to play in the third. It was his third touchdown of his career.

After Carl Gettis forced another turnover, the Tigers turned that into three points on a 35 yard field goal from Grant Ressel.

The Tigers went four plays, 77 yards after Aldon and Brad Madison dropped Coffman for a sack. DeVion busted off a 59 yard run. The drive capped with Moe’s second touchdown of the game, a four yard catch off a play action fake.

Jasper Simmons picked off Coffman for the fifth turnover of the game, giving the Tigers the ball back at the KSU 39.

With Klein back in the game at QB, the Wildcats scored with 6:55 to go on a 35 yard touchdown pass off play action. The Wildcats coverted the two point try to cut Mizzou’s lead.

Kansas State scored on a late drive, 12 plays, 83 yards ending with a 26 yard touchdown pass from Coffman to Aubrey Quarles.  They missed on a two point conversion.