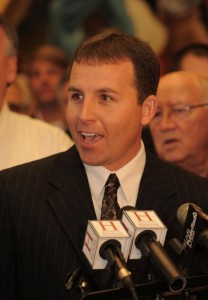 A jubilant House Republican Caucus celebrates a big victory and prepares for a legislative session in which it will have dominant numbers.

House Majority Leader Steven Tilley, a Republican from Perryville, welcomed news reporters to the day-after new conference at the Capitol.

“Thank you all coming out and let me be the first to introduce you to the largest Republican majority in the history of the state of Missouri,” Tilley said to thunderous applause by House Republicans filling about half the House Lounge.

Republicans now hold 106 of the 163 seats in the Missouri House, which assures Tilley of becoming the next House Speaker and gives Republican incredible power to move legislation. 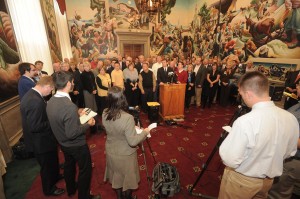 Republicans crowd into the House Lounge

“The voters of Missouri sent a very, very strong message,” Tilley said. “And they want a government that’s accountable. They want one that lives within its means, that holds the line on taxes, that encourages economic development so that anyone that wants a job can find one. The people and the Republicans of the Missouri House heard their message loud and clear and that’s exactly how we’re going to govern.”

The numbers tell the story. In next year’s legislative session, Republicans will hold a 106-57 advantage over Democrats. Republicans gained 17 seats in the election and have drawn three votes shy of having a veto-proof majority. Three state representative races remain incredibly close and could be subject to a re-count.