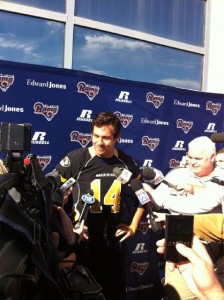 Danario Alexander, the former Missouri Tiger, and Sam Bradford, the former Oklahoma Sooner, had a friendly bet riding on this past Saturday’s game.

Whoever’s team lost, they had to wear the school colors of the other school. Well, I was sent this picture that was posted on Danario Alexander’s twitter page at twitter.com/D_Alexander84.

Bradford’s name was even stitched on the back of the jersey. Since Bradford was number 14, he had to borrow former quarterback Chase Patton’s jersey. Great stuff.