You are here: Home / Sports / Why Missouri will lose this weekend (PODCAST) 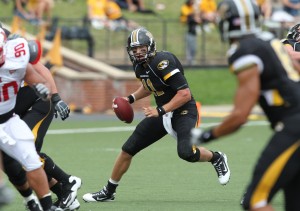 How will Gabbert hold up this week at Texas A & M? UPI/Bill Greenblatt

The more and more I look at this game, the more it scares me, going off the numbers and one important intangible…Blaine Gabbert’s hip pointer?

How much of his injury is hip pointer, or ribs, consider he was wearing a flak jacket earlier this week at practice? I’m always a little skeptical when it comes to injuries, but I’m more concerned with how well Gabbert can perform whether it’s ribs or a hip issue. Gary Pinkel said earlier this week, the key for Gabbert will be if he can torque his body to make good throws. Missouri must run the ball better than they did against Colorado.

Defensively, Missouri is the best in the Big 12 in points allowed and third nationally, even better than Nebraska, and they have had a knack for turning the ball over while A & M has had their share of turnovers.

I think A & M has faced tougher competition to this point, losing at Oklahoma State 38-35, and last week in Dallas, 24-17 to Arkansas. On this week’s  Pressbox Podcast with Bill Pollock

I break down the game with Jonathan Shelby and we get the message out to Mizzou fans about what the Gold Rush means during home games.