A couple from Doolittle has claimed their $4.9 million Lotto jackpot after buying a $1 ticket. Sharon and Dale Baney live in Doolittle, just outside of Rolla, where they buy a one dollar Lotto and one dollar Powerball every Wednesday at Ozark Oil. Last week, the clerk told them they won. 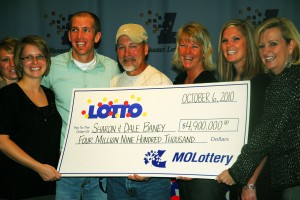 “What’s funny is they have the [security] video of the whole thing … so I went back there and watched it,” Sharon says. “I was holding my heart.”

“She looked like she needed an ambulance,” Store owner Tony Sherrer says.

Now, she says they’re hoping to take a break from the excitement. The Baneys say they’ve contacted a lawyer and a CPA, but they’re going to just sit on the news for a few weeks and let it all sink in before doing anything.

However, Dale has his eye on a new ride.

“I’ve always had a new vehicle,” Sharon says, noting that her husband never has. “He’s going to get a new truck.”

They also want to pay off they’re kids’ student loans and Sharon says she likes to travel and is looking forward to some girls’ weekends. Also on their pay-off list: their mortgage and Sharon’s car loan.

Sharon works at the local school as a secretary for the superintendent, Dale at Brewer Science in Rolla. Both of them say they have no plans to quit their jobs, that they’ll be back at work on Monday.

Sharon’s boss asked if he would need to advertise her position, but she said “no”. “I love my job,” she says.

Ozark Oil gets a bonus equal to 1 percent of the jackpot amount. Sherrer says that money will be used to improve the property. A friend of the Baneys, Sherrer drove the couple to Jefferson City to claim their prize.

The Baneys say they’re planning for the lump-sum option of the $.49 million winning, which would amount to about $3.9 million before taxes.

Previous Post: « Blunt, Carnahan square off in KC for first debate in Senate race (AUDIO)
Next Post: The Return of the Elk »