Kip Cullers from Stark City might not be a household name everywhere, but in certain Ag circles, he’s a rock star. 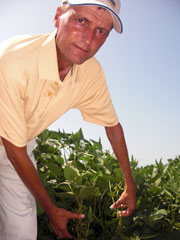 Kip Cullers is a farmer in the Southwest corner of the state. The average soybean crop statewide right now is less than 40 bushels per acre. Cullers is pushing 160.

His soybeans get a jumpstart from the fertile Newtonia red soil, but he says he can pin his success on one thing. He says he tries any technique he can, expecting about half of them to fail from the start.

However, he says he continues to work on pushing height, maximizing how much water the crops take in, using good genetic seed stock and keeping fungus and bugs far away from his soybeans. He recalls a conversation with a fellow farmer near Iowa.

“Gary said called me one day, and he was out there and he decided he had an average of about 250 aphids per plant out there and he wanted to know if I thought he ought to spray them,” Cullers says. “I said ‘well my gosh yeah Gary, would you want 250 lice sucking on you?’ and he said, ‘well how many would be too many for your contest field?’ and I said ‘one.’

Taking a simple look at Cullers numbers: the average farmer gets about one truckload of beans per acre — Cullers gets four.

Cullers’ crop breaks the world record for soybean yield … a record set by him in 2007. But he’s not resting on his laurels yet. He says he’s pushing for a 200-bushel yield.

Cullers pushes the limits with his corn crops too. His corn yields nearly 350 bushels per acre — more than twice what most farmers produce.

He’s not happy with 160 bushels of soybeans either. He says he thinks he can top 200.

State officials traveled to Stark City Tuesday to congratulate Cullers on his accomplishment.

“Agriculture is the backbone of Missouri’s economy, and growers like Kip Cullers are the reason why,” Gov. Nixon says. “Missouri farmers feed, fuel and clothe world, and they also create jobs, support local businesses and help our communities thrive. When it comes to soybeans, Kip Cullers continues to take the science to a whole new level, and his work is blazing new trails that will keep Missouri agriculture moving forward.”