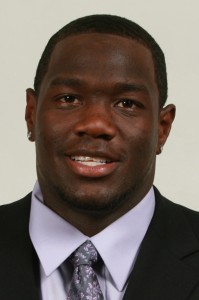 Missouri State junior tailback Chris Douglas has been named Division I FCS Running Back Performer of the Week by the College Football Performance Awards after he averaged 19.1 yards per carry and scored two touchdowns in Saturday’s wild 72-59 loss at Murray State.

The College Football Performance Awards are announced each week to provide the most scientifically rigorous conferments in college football. Recipients are selected exclusively based upon objective scientific rankings of the extent to which individual players increase the overall effectiveness of their teams.

In the Murray State game, Douglas finished with a career-high 191 rushing yards on 10 carries. His 97-yard touchdown run in the first quarter matched the second-longest run from scrimmage in Bears’ history and helped MSU build a 21-3 lead in the first 10 minutes of the game.

He was previously recognized by CFPA as an honorable mention running back for his efforts against Eastern Kentucky on Sept. 3. He posted 128 yards on 10 carries in that victory.

The Bears finish up a two-game road swing this Saturday at Indiana State (3 p.m.) before returning to Plaster Field for a Homecoming matchup with Western Illinois on Oct. 23.