The U.S. Department of Agriculture has made a much bigger than expected cut to the corn production estimate. 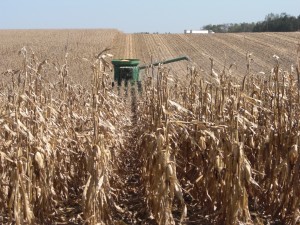 The Ag Department now has corn at 12.664 billion bushels nationwide, down 4 percent from September’s estimates. The USDA says crop is 3 percent less than 2009’s record crop across most of the Corn Belt and Tennessee Valley — lower than expected yield.

For Missouri, USDA expects the corn harvest to come in at 408.7 million bushels, compared to 446.760 million in 2009, with an average yield of 134 bushels per acre. That’s down from September’s estimates at 143 per acre.

Missouri had both extremely wet and extremely dry conditions this summer, leading to a mixed bag for farmers. However, a dry, mild fall is contributing to a successful harvest season for corn. Though farmers aren’t pulling in as much as they’d like, they’re facing few problems in getting it in.

Gene Danekas is the director of USDA statistics service for Missouri. He says combines are out in the fields now, pulling in field corn for livestock feed and ethanol. 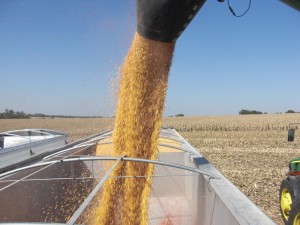 He says the dry conditions means farmers might be able to skip the drying bins altogether, which will save money.

Missouri turned out about 160 bushels per acre in 2004, a record season, and lower than 100 per acre over the past ten years.

Danekas says Iowa pulls in an average of about 180 bushels per acre with Illinois slightly behind that.

He calls those two states the tail that wags the dog, saying they’ve got the most acreage and always have the best yield so they represent a large part of the U.S. production.

“I heard one economist say this is the best looking, poorest yielding crop he’s ever seen,” he says.

USDA’s numbers for the region:

The biggest month-to-month decline was in Illinois at 14 bushels per acre, with Indiana and Iowa both down 10 and Missouri and Nebraska losing 9 acres on average from September to October.

Before the report, analysts saw the crop at 12.950 billion bushels with an average yield of 159.9 bushels per acre.

For soybeans, USDA sees the crop at a record 3.408 billion bushels, 2 percent less than a month ago but 1 percent more than a year ago.

The average yield is estimated at an all time high of 44.4 bushels per acre, compared to 44.7 last month and 44.0 last year. USDA reports most of the major production states saw a month-to-month decline in the yield estimate, but in most of those states were the projection increased, yield is seen at a record high, including Illinois, Nebraska and Wisconsin.

Ahead of the report, analysts saw production at 3.491 billion bushels with an average yield of 45.0 bushels per acre.

The Brownfield Network contributed to this story.