The Union Pacific Challenger Number 3985 is making its way through Missouri today on its way from Cheyenne, Wyo. to Gorham, Ill. The Missourinet — and lots of school children — caught up with the Challenger in Jefferson City. Next stop, Sedalia and Washington. 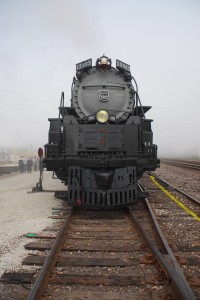 Rick Braunschweig is a Union Pacific fireman from Cheyenne; he’s the fireman aboard the Challenger during its tour. However, it’s his job to keep the fire going instead of putting it out. He also gauges the water and steam.

The Challenger 3985 is one of only two steam locomotives of its kind still running. Built in 1943, Braunschweig says it was still considered modern when steam was finally replaced by diesel-run trains in the late 1950s.

To kick off the tour, the locomotive pulled the Ringling Bros. and Barnum & Bailey Circus train from Speer, Wyo., to Denver, Colo.

“Ringling Bros. and Barnum & Bailey is excited to be part of this railroad hertiage celebration,” says Keith Anderson, trainmaster of the Ringling Bros. Blue Unit train. “We’ve been riding the rails for the last 175 years, so [we are] a part of rail history.”

Cars were stocked full of performers, animals and all of the gear they need for their show.

The Challenger No. 3985 was designed by Union Pacific Railroad and built in 1943 by the American Locomotive Company. It is one of the 105 Challengers built for Union Pacific between 1936 and 1944 and is the only operating engine of its class in the world.

It last operated in regular train service in 1957. It was retired in 1962 and stored in the Cheyenne roundhouse until 1975 when it was placed on display hear the depot. A group of Union Pacific employee volunteers restored the locomotive to running condition in 1981.