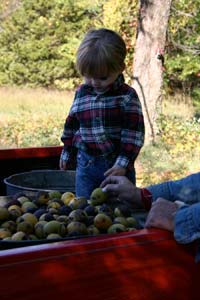 It’s a ritual for many Missourians, especially young Missourians. It can prove profitable, too. No skill is needed, other than the ability to stoop down and pick a nut off the ground.

Picking up and turning in Black Walnuts is a fun way to earn a little money this fall, but it is serious business for Hammons Products of Stockton. President Brian Hammons says there really isn’t a typical person who harvests walnuts.

“From the young person who goes out with grandpa and picks up nuts in the backyard all the way to the organization, like 4-H Club or FFA or Boy Scout Troop, church group that goes out and picks up nuts as a fundraiser,” Hammons tells the Missourinet.

Hammons Products buys American Black Walnuts at nearly 200 hulling locations in 12 states. There are 120 stations in Missouri where Hammons buys most of its product, 65% in fact. The crop this year appears to be down, which could drive up the price. On its website, Hammons projects a harvest of between 10-and-15 million pounds, well down from the average of 25 million. The opening price is higher: $11 per hundred pounds after shelling. That price will fluctuate, depending on the harvest. Buying continues through October 30th. This is the 65th year that Hammons Products will buy walnuts. The location of buying stations is listed on the Hammons website.

Only about 7% of what Hammons buys is the actual edible nut meat; 60% is the shell, which is ground into various products, such as an abrasive, cleaning and polishing agent, a filtration agent as well as in sandblasting operations.

Hammons doesn’t really have any tips for getting rid of the stain you can pick up from the hulls. Besides walnut stained hands should be seen as a badge of honor.

“It is,” Hammons laughs at the mention of the stain the shell can leave behind. “For me, I know it really was that case. Several years ago, in our record harvest, I had Black Walnut stained hands when I went into some meetings with customers and, well, that was a badge of honor. I don’t spend all my time in the office.”

Hammons is the third generation to run the company that his grandfather began in 1946. His son, David, is the company marketing director.

Hammons does have a bit of advice for harvesting Black Walnuts: get there before the squirrels do.