You are here: Home / Sports / Cardinals eliminated from playoff contention 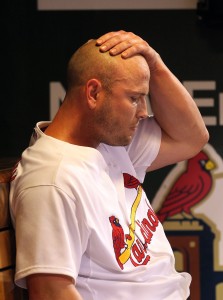 Matt Holliday ponders what went wrong in the ninth inning during the Cardinals 7-2 loss to Pittsburgh. UPI/Bill Greenblatt

Jay Bruce hit a walk-off home run in the bottom of the ninth inning to give the Cincinnati Reds a 3-2 win over the Houston Astros to clinch their first Central Division title in 15 years. It wouldn’t have mattered if the Reds lost that close game because the Cardinals got drubbed by the Pirates 7-2.

Cardinal fans at the game must have sensed something was wrong when updates stopped showing up on the out of town scoreboard. By the time the Cardinals were down 4-2, the Reds had already won.

Pittsburgh scored three runs in the first off Jeff Suppan, a midseason pick up who will finish his season 2-8. The Pirates padded their 4-2 with three more in the eighth off Mike MacDougal.