You are here: Home / Sports / Rams, Bradford get first win 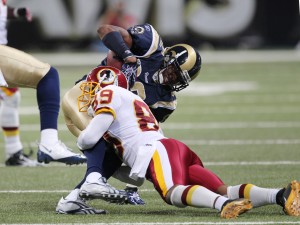 The St. Louis Rams ended their 14 game losing streak at the dome as they picked up their first win of the 2010 season with a 30-16 victory over the Washington Redskins. The Rams are 4-27 in their last 31 games and two of those wins are now against the Redskins.

With Steven Jackson sidelined with a groin injury, Kenneth Darby rushed for 49 yards on 14 attempts and scored the go-ahead TD in the third quarter. Rookie quarterback Sam Bradford got his first NFL win by going 23 of 37 for 235 yards with a touchdown and interception. Bradford distributed the ball around finding nine different receivers.

The Redskins battled back to make it a 14-13 game after the Rams scored twice in the first quarter. Then the Rams defense took over including a key turnover on a Santana Moss fumble which led to another Rams’ first half touchdown that put them up 14-0.

Moss has six catches for 124 yards and was Donovan McNabb’s favorite receiver. McNabb finished 19 of 32 for 236 yards with a touchdown and pick.

The Rams will have some issues with Jackson’s groin and both safeties injured. Oshiomogho Atogwe injured his thigh in the second quarter and Craig Dahl, was inactive with a concussion. James Butler and Darian Stewart did a great job filling in.

The Redskins took the lead after the Rams jumped out to their two score lead. McNabb hit Moss for a 21-yard touchdown after Mardy Gilyard’s lost a fumble on a kickoff return, and Phillip Daniels blocked Brown’s 21-yard field-goal attempt at the end of the half, keeping the Rams’ lead at 14-13. Washington took the lead in the third quarter with a 21-yarder, before the Rams took control of the game again.