Missouri’s 46th governor, Warren Eastman Hearnes, was inducted into the Hall of Famous Missourians today. The ceremony and unveiling of a bronze bust was held in the chambers of the Missouri House of Representatives at the Missouri Capitol. 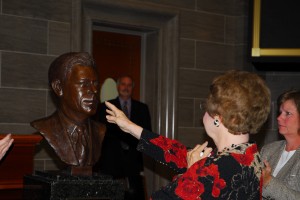 is widow, Betty Hearnes, recalled their visit to the Capitol — and that chamber — 62 years ago after Warren had been overseas serving in the armed services for quite some time.

Hearnes was a Charleston, Mo., native. He served as governor from 1964 to 1973. He died in August 2009. He  joins the ranks of famous Missourians such as Samuel Clemens, Walter Cronkite, and Sacajawea.

His widow, Betty Hearnes, says they visited to the Capitol as newlyweds. That was 62 years ago. She started off by saying “he was a skinny guy” … even if he didn’t stay that way. Once a public servant, always a public servant, she said, noting that she is still proud to be considered as such.

The bronze bust was commissioned by former House Speaker Bob Griffin. It’s rumored he’s raising private funds for a few others in the future. Only House speakers can request certain people be honored in the third floor rotunda, which features famous Missourians.

Betty Hearnes reached out and touched the likeness of her husband’s face when the bronze bust of him was unveiled. She noted that the artist had even included the scar on his left cheek. Even as she clutched a tissue in her right hand, her voice never wavered throughout the event. Maybe once, when she talked about his love for the House.

Sculptor William J. Williams of Bellows Falls, Vt. created the bust, as well as 25 others in the hall, including the first one — Samuel Langhorne Clemens.