Fewer than 600 Ozark Hellbenders remain in the wild. And that leads to a movement to add it to the national endangered species list.

The only place in the world where you will find the Ozark Hellbender is in the White River basin of southwest Missouri and northwest Arkansas. It’s one of the world’s biggest salamanders, sometimes grows to two feet long. Its population has dropped by 75 percent in the last 20 years or so.

Their average age is increasing, meaning few young are being produced. 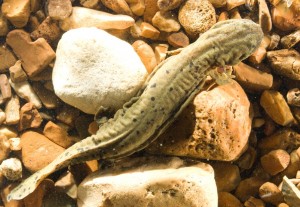 Fish and Wildlife expert Charlie Scott says one reason they’re important is because of what they tell us about the place they live. He says the condition of the Hellbender indicates the environmental health of the White River and its tributaries are not that healthy.

Scott thinks humans are contributing to their decline through recreational use of the rivers, nutrient runoff, sedimentation, and ore and gravel mining. The greatest threat, though, is a fungus that is fatal to hellbenders and other amphibians. It’s in the water.

He says the Ozark Hellbender will go extinct in the wild within 20 years if it doesn’t get help.