A World War II veteran from Central Missouri is honored by the French government for his valor. Governor Nixon presented the honors. 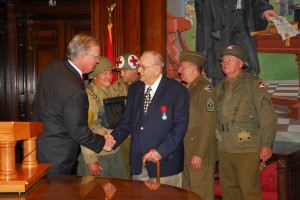 Gilbert Pritzel of Holts Summit was given the Legion of Honor in a ceremony in the governor’s office. It’s the highest award bestowed by the French Republic. Pritzel, who already earned five bronze stars for his service in WWII as a teenager, was humbled.

“I didn’t sleep too good last night,” he said. “I guess I was like a little kid with his toys, wanting to get up and play with his toys. I guess nerves was most of it.”

The Legion of honor is passed on to those who helped liberate France from Germany, but it’s a rare honor. Only about 100 are given each year.

After receiving the Legion of Honor from Governor Nixon today, Pritzel recalled some tense times during World War II, including when a morter thrown into his foxhole — landing three inches from his right foot — turned out to be a dud.

Pritzel’s family says he only started talking about his two years of combat recently. Pritzel says his kids started asking about it.

“You don’t know what it’s like, I’ll tell you, I can’t explain what it’s like,” he says. “You’ll be walking down the road and there you see a guy’s leg hanging up in the tree. You go over here and theres another guy shot in half from a shell. You just kind of black it ou tin your mind. It’s just … it’s something awful.”

Gov. Nixon points out all of this took place before Pritzel was able to vote or even buy a drink.

Pritzel also tells of almost killing a future U.S. president while guarding a truck. He says he thought he heard a German soldier walking up in the dark and called out for the password. Hearing nothing, he went up to the soldier and stuck a gun barrel in his belly. The man gave the password “pretty quick” at that point. It was Ike Eisenhower.

Pritzel received five bronze stars for valor during his service in the war.