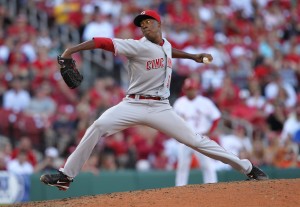 Cincinnati starting pitcher Travis Wood pitched seven strong innings and hit his first career homer to lead the Reds to a 6-1 win against Adam Wainwright and the St. Louis Cardinals. Wainwright failed for the fourth start in a row to get his 18th win.

The Reds scored three unearned runs after St. Louis second baseman Aaron Miles booted a potential double-play grounder with one out in the first. Ramon Hernandez drove in Orlando Cabrera with a bases-loaded grounder and Jonny Gomes added a two-run double.  Then Wood hit his homer with two out in the fourth and Joey Votto singled in a run in the ninth to run his NL-best total to 98 RBIs, passing Albert Pujols for the lead.

Cincinnati has won 15 of its last 20 games since dropping three in a row to St. Louis in early August.  Meanwhile the Cardinals are 6-14 after that sweep.