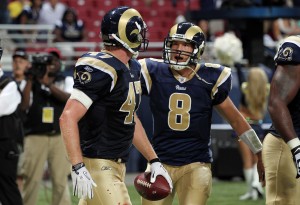 Rams top pick Sam Bradford said it is not up to him to decide whether or not he is the starting quarterback when the Rams open the season for real on September 12th against Arizona, but he certainly made his case in Thursday’s 27-21 win over the Baltimore Ravens.

It’s not the Baltimore defense he would see during the regular season as Raven’s head coach John Harbaugh sat all of his starters, but Harbaugh had great things to say about Bradford. “He’s going to be a star, there isn’t any question about it.”

Bradford was a perfect 6 for 6 for 68 yards including a touchdown. Even Keith Null and Thaddeus Lewis, fighting for the third string QB job played well. Null was 7 for 10 for 90 yards with a TD and pick. Lewis was 6 of 8 for 89 yards with a TD.

While the Ravens rested everyone, the Rams, who finished 3-1 in the preseason, opened with their starters except running back Steven Jackson. They used the game to audition potential backups Kenneth Darby, Chris Ogbonnaya and Keith Toston, who combined for 117 yards on 32 carries.