The Missouri 340 is underway meaning hundreds of paddlers are making their way from Kansas City to St. Louis. Scott Bennett from Kansas City says it’s harder than it sounds. He says the fatigue is really starting to set in, but reaching the halfway point has been a real boost to his morale. 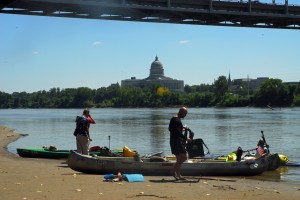 He says he doesn’t care if he comes in last, he just wants to finish. Bennett says he’s enjoying seeing parts of Missouri he’s never seen before, even as a life-long Missourian.

The checkpoint in Jefferson City along the Missouri River closes at 7 tonight — meaning those who don’t make it by then are disqualified from the race. Next stop — Hermann, where many of them will stay the night.

Bennett says he’s looking foward to the finish line in St. Louis, where there’s lots of beer and champagne waiting for he and his team.

It’s billed as the longest paddle race in the world — 340 miles.

Bennett says he and five others scrambled to enter on a beer bet. After getting a canoe on eBay, which he calls the “lead sled,” he tells the Missourinet he has no intentions on winning, just on finishing.