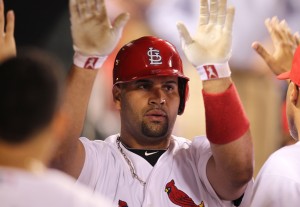 Albert Pujols hit his 31st home run of the season, but the Cardinals were limited to just five singles and came up short losing to Milwaukee 3-2.

Dave Bush pitched six innings for Milwaukee and shut down the Cardinals with the exception of Pujols’ 397th career homer. Felipe Lopez made two errors and Jaime Garcia got pegged with the loss giving up all three runs which were unearned.

Cincinnati beat Arizona to move two games ahead of the Cardinals in the Central Division.