Hundreds of people celebrate in Miller County, as the first project in the country funded by the 2009 federal stimulus package is finally complete.

Work on the new Route 17 bridge over the Osage River near Tuscumbia started about a year and half ago. It replaces a bridge built in 1933, which was in such terrible shape the Department of Transportation had to shore up the sub structure of the bridge numerous times over the last decade to prevent it from slipping into the river.

Keith says the hundreds of people from the region that showed up for the ribbon cutting ceremony, didn’t do it just because of the media attention.

“Infrastructure’s important. This bridge impacts everyone in this community’s and region’s life on a daily basis and quite frankly they didn’t like driving across the old bridge and they’re happy to have this one,” Keith said.

In the past, some politicians had described this project as the “bridge to nowhere.”

“This one happens to connect the Lake of the Ozarks, the biggest tourist area, Fort Leonard Wood, and this community, and this is the crossing of a major river, the Osage River. If this bridge is not here, you’ve got a 30 mile loop to go to get to the other side,” Keith said.

Locals say they were also frustrated to hear it had been described as “the bridge to nowhere,” since they take it to work,  use it to transport farm equipment, and their children’s busses drive over it on their way to school. 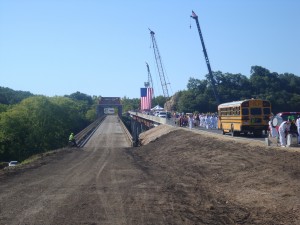 Work on the project started just minutes after President Obama signed the stimulus package into law in February 2009.

“We did that to show that investment in infrastructure can move quickly and can help our economy by generating jobs in the short term and providing wonderful infrastructure facilities that will serve this country and this state for the next 100 years,” Keith said.

There was a parade across the bridge after the ceremony this morning, with hundreds of people attending the event in the mostly rural area. The parade was led by the Eldon High School marching band, and it led to a park nearby where the celebration continued. The events were organized by the people Miller County and Tuscumbia. The town has a population just over 200, and there were at least twice as many people than that on hand for the ceremony.