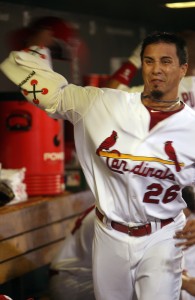 Kyle Lohse is trying to come back from forearm surgery that has had him on the disabled list since May. However, he says don’t be too concerned with his numbers from Thursday night’s game. He had more on his mind than throwing zeroes.

Lohse pitched five innings and threw 85 pitches while allowing five run, but in this third rehab start, Lohse was concerned more with adding arm strength and speed than he was with results on the scoreboard.

Lohse told the Springfield News-Leader, “It was tough. Some of the things they were hitting, they had no business hitting. If I wanted to go out there and throw sliders and curves, it would have been completely different.”

Lohse is in the second year of a $41 million contract and was 1-4 with a 5.89 ERA before going on the DL. Lohse left to join the team in Florida as they get ready for a series with the Marlins. Lohse must now lobby to pitching coach Dave Duncan that he is ready for his scheduled start on August 13th, when the Cubs open a series at Busch Stadium.