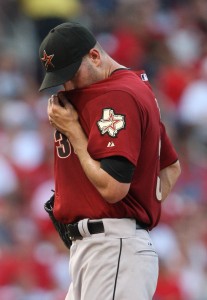 The Cardinals ended the Houston Astros’ seven game winning streak by jumping on starter J.A. Happ by scoring seven runs in the first two innings on their way to an 8-4 win Wednesday night at Busch Stadium.

Chris Carpenter benefitted from the big run cushion for his 12th win of the year as he pitched into the eighth inning allowing two runs on four hits and three walks while striking out three.

Albert Pujols, who is 12 for 27 in his last six games, hit a ground rule double to put runners on second and third with one out in the first. Three straight singles by Matt Holliday, Allen Craig and Yadier Molina made it 3-0. Then with two outs, Chris Carpenter delivered with an RBI single for our four spot in the first.

In the second Pujols was back in the mix. After leadoff walks to Felipe Lopez and Colby Rasmus, Pujols launched his 27th homer of the season for the 7-0 lead ending Happ’s night.

One more side note, Cardinals pitcher Jason Motte who said Tuesday he expected to miss just a couple of days, was placed on the 15 day DL for a shoulder sprain.