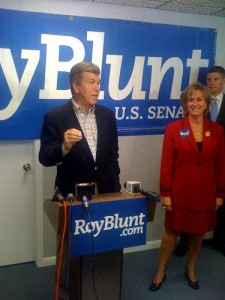 Tuesday’s primary offered the first opportunity for the Tea Party movement to make its presence known at the polls in Missouri.

State Senator Chuck Purgason said he was a member of the Tea Party long ago, and while he wasn’t endorsed by the party itself, the relative unknown was able to get 13% of the Republican primary vote. He faced 7 other people, including Congressman Roy Blunt, who won the nomination.

“Somebody asked me earlier today, ‘what about the votes Chuck Purgason got?’ I said, ‘you know, he may have got those votes because people like him,’ and that’s OK. You know, every campaign doesn’t have to be about voting against somebody, it can be about voting for somebody,” Blunt said at a victory celebration in Jefferson City Wednesday.

Blunt thinks that the Tea Party movement will help his case for the U-S Senate, as he says they stand for many of the same values he does, including keeping spending down.

Blunt also says the Tea Party is energizing conservatives, which the man he hopes to replace says could be very beneficial.

Senator Claire McCaskill, the Democrat who will become Missouri’s senior Senator once Bond steps down, doesn’t think the votes that went to Purgason will necessarily go to Blunt.

“It would not surprise me if many of Senator Purgason’s voters ended up taking a hard look at the Constitution candidate and Libertarian candidate,” McCaskill said.