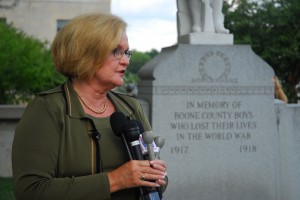 A report issued by the inspector general shows thousands of bodies might be mismarked or misplaced at Arlington National Cemetery. Senator McCaskill says she intends to get some answers this week about what she calls “heartbreaking incompetence.”

McCaskill’s Subcommittee on Contracting Oversight is holding a hearing Thursday with Department of Army officials.

“The problems at Arlington National Cemetery result from a failed effort to digitalize burial records,” she says. “Despite spending over $5.5 million on multiple IT contracts over seven years, the cemetery’s complex records remain in paper form and prone to human errors.”

McCaskill’s subcommittee is investigating possible contracting waste and fraud at the cemetery.

UPDATE: The committee has released the documents related to the hearing set for Thursday. View the hearing live at 10 / 9 a.m. Central Thursday, July 29.

The initial report, which examined a small section of the expansive cemetery, found 12 graves were either found empty or misidentified. One vereran’s remains were placed in a grave that was already occupied.

The report notes “the loss of accountability of remains, remains encountered in gravesites believed to be unoccupied, unmarked gravesites, discrepancies in burial documentation (and) improperly marked gravesites.”

Two men who resigned over the controversy, former Arlington Superintendent John Metzler have been called to testify Thursday, but McCaskill wouldn’t speculate on exactly who would be at the hearing.