The judge, the prosecution and the defense remained behind closed doors today at 1:30 when a status hearing was to begin for Alyssa Bustamante, 16, who is charged as an adult in the slaying of 9-year-old Elizabeth Olten. 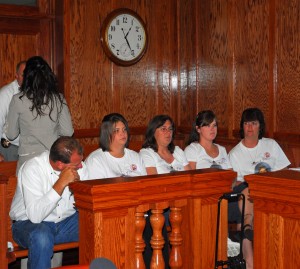 Bustamante, who was 15 at the time, is currently being held without bond in Morgan County, under the supervision of the Morgan County sheriff, who is working in tandem with Cole County Sheriff Greg White. Bustamante has pleaded not guilty to the stabbing death of Olten in October 2009.

After nearly 20 minutes in the judge’s chamber, the attorneys emerged and the hearing began. At issue, again, was whether Bustamante should be allowed to finish high school while she’s incarcerated.

Bustamante’s attorneys, Don Catlett and Charles Moreland, called Myron Graber, director of secondary education for Jefferson City Public Schools, to the witness stand to inquire of him the policy of continuing education for students who have been suspended or expelled. Graber explained simply that “it’s out of our hands.”

Catlett and Moreland then called Cole County Sheriff Greg White to the witness stand to ask whether Bustamante had been given any educational materials while she was being held. White says she had requested, and had been given, a GED book to study.

Affidavits on both matters were given to the court.

Judge Pat Joyce said the court would stand in recess until lab results from the investigation were made available, and which point she would again confer with the prosecution and the defense.

A Greene County jury will be brought into Jefferson City to hear the case when it goes to trial.

Previous Post: « McCaskill wants answers from Army officials on why thousands of bodies at Arlington are mismarked (AUDIO)
Next Post: He remembers the big guns on the big ship (AUDIO) »