Missouri Dept. of Transportation maintenence worker Kris Sandgren pedaled around the Capitol building and into the MoDOT headquarters parking lot to wrap up a 2,600 mile bike ride to honor MoDOT’s fallen workers. 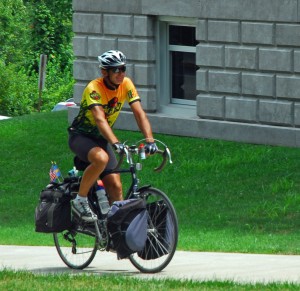 Nearly 130 MoDOT workers have been killed while working on Missouri roads, bridges and highways. Sandgren used a month of own vacation time to make the 9-state trek to raise awareness and money to honor those fallen workers.

The mountains in the Northwest, Washington and Idaho, were the hardest part he says, noting that he probably should have trained harder for that part and dealt with sore ankles and knees for the first few days. But after that, in Montana, he rode the front end of a storm, catching a tailwind that propelled him “at the speed of Lance,” he says, gaining 110 to 150 miles a day.

Emotionally, he says the Dakotas were rough because of the expansive landscape when he was seemingly getting nowhere for hundreds of miles. However, he says the beauty of his surroundings outweighed any of the hardships in that part of the country.

He says finding a place to sleep each night was also a challenge, but found a place to lay his head each night either at campgrounds, in city parks or at the home of gracious people he met along the way.

The easiest part was when he road ahead of a storm for a few days and caught a tailwind that carried up to 150 miles a day.

In the end, he says he’s just one piece of a puzzle to honor his fallen co-workers. He says now he’s just crossing his fingers that the pledge money starts rolling in to build memorial in Jefferson City honoring them.