Roads are closed, structures are damaged and one woman has been killed by flooding in Northern and North Central Missouri. The Transporation Department is urging caution to those traveling. 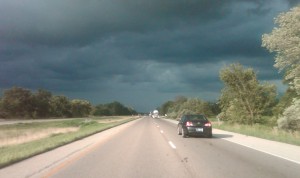 Wallace says she can’t give an estimate on when the roads will be reopened since it just all depends on the damage, and the weather ahead of us.

Wallace tells motorists if there’s water over the road, turn around, find an alternative route and notify the authorities. She urges planning ahead by checking the MoDOT map online or calling its roadside assistance hotline, 1.888.ASK.MODOT (1.888.275.6638).

Flash flooding is being blamed in the death of a northeast Missouri woman.

Authorities say 48-year-old Dana Ruth Poage of Louisiana, Mo., slipped Tuesday afternoon and became trapped in a culvert as she and her teenage sons were swimming in a rain-swollen creek.

Residents says the storms brought up to 10 inches of rain in some areas, forcing evacuations and car rescues.

In Louisiana, Missouri the water rushed away so much debris that it clogged the sewer systems.

Ozarks First has posted a video of cleanup efforts.