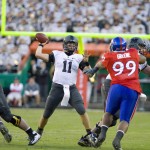 Missouri Tigers junior quarterback Blaine Gabbert was added to the Davey O’Brien Foundation National Quarterback Award Watch List today. In his first season as a starter, Gabbert completed 262-of-445 passes for 3,593 yards (the 3rd-highest single season passing total in MU history) and 24 touchdowns, to go with 9 interceptions.  He also rushed for 204 yards and 3 touchdowns, while playing with a severely sprained ankle against Nebraska.

The 2010 O’Brien Watch List features 13 seniors, 13 juniors and four sophomores. The ACC and Big 12 lead all conferences with five candidates each on the list. The Pac-10 is represented by four players.

Appearing on the Watch List is not a requirement for a player to be awarded The O’Brien. Quarterbacks from all 120 NCAA Division I Football Bowl Subdivision (FBS) schools are eligible for the award until the field is narrowed to 16 semifinalists on Monday, Oct. 25. The Foundation and the Selection Committee will announce three finalists on Monday, Nov. 22. The 2010 winner will be announced on The Home Depot ESPNU College Football Awards Show on Thursday, Dec. 9.

Previous Post: « Many join Carl Edwards in ride for his friend (VIDEO)
Next Post: Uncertainty after “Ford bill” passage (AUDIO) »