It’s now up to a judge to decide if the measure challenging the federal health insurance law will be on the August ballot.

The lawsuit argued in a Cole County Circuit Court alleges the ballot measure passed by the legislature as H.B. 1764 is unconstitutional. Attorney Chip Gentry tells the court the measure is really a vote on two different questions, which is not allowed under state law.

“Your fundamental right to cast a meaningful vote is frustrated when you’re faced with two questions but one box,” Gentry said in court.

Here is the language of the ballot measure:

Shall the Missouri Statutes be amended to:

Deny the government authority to penalize citizens for refusing to purchase private health insurance or infringe upon the right to offer or accept direct payment for lawful healthcare services?

Modify laws regarding the liquidation of certain domestic insurance companies?

Jim Layton with the Attorney General’s Office argues in defense that looking at past ballot measures, this one is not any more vague. 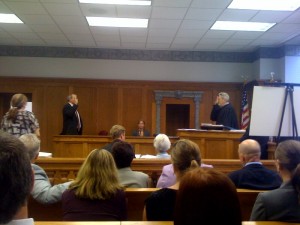 Gentry is representing two Missouri women who filed the lawsuit, Barbara Finch of St. Louis County and Mary Lucy Brenner of Osage County. He says the measure was “logrolled” on to the ballot by legislators at the end of the legislative session.

“It really created the fire drill that we find ourselves in. But if Missouri voters were just going to roll over and not challenge this type of behavior and not attempt to get meaningful ballots in front of the voters, then the constitutional provisions, the three principals, the cornerstone ideals that we have in having clear titles, single purpose and original purpose are for naught. They’d be eroded and eviscerated,” Gentry said.

Gentry argued the initiative placed on the ballot by the legislature didn’t represent the purpose of the original bill, but Layton says it all fits under the umbrella of the title “relating to insurance.”

“In our view this is a single subject case, it’s not really even a very close question on single subject. It has a clear title well within the realms of what the court has allowed, and the purpose is the same as the general overriding purpose of the original bill. It should be allowed to be on the ballot,” Layton said.

Gentry also argued the state Auditor didn’t phrase the final two sentences of the measure to represent the true economic impact. Four of the more than 20 state agencies the auditor contacted thought it may have some sort of unknown but negative cost impact.

“(Gentry’s) for some reason crazily alleging that the state auditor’s fiscal note was insufficient and unfair. So obviously we’re saying that she followed her statutory duties and in fact the fiscal note was not insufficient or unfair,” said Brandee Bower, as Gentry, within earshot, laughed at the comment following the hearing. Bower is the attorney representing State Auditory Susan Montee.

There was also a third attorney on the state’s side representing Rep. John Diehl, who sponsored the bill. Diehl wanted the hearing to be pushed back because he was at the state house for the special legislative session all day, but Wilson denied the request. The attorney said this limited the insight the court was able to gain, because the author of the bill, who could answer questions about the original purpose, was not able to testify.

“Timing” caused a lot of furrowed brows in the courtroom. The timing so close to the primary has greatly expedited the case through Cole County Circuit Judge Paul Wilson’s court. But Wilson also points out that because there’s still so much time before the insurance law goes into effect in 2014, it’s not clear how this measure, if passed, would actually interact with it.

“I think it’s certainly one reasonable conclusion that it has no present effect, it affects no present laws, it affects no present rules and the only effect is has on any future legislature is whatever affect they give it,” Wilson said, when questioning Layton in a conversation about whether or not the spat over the fiscal note should even be considered.

There’d still be plenty of time before the law would actually take effect to try to get the statute overturned or pass another law, or it may be trumped by federal law anyway. Meantime, Layton recommended to Wilson at the end of the hearing that if his side were to lose, Wilson should word his judgment to simply order local authorities not to certify the votes on Proposition C.  After all, with the timing, some absentee ballots have already been printed.

Wilson said after the hearing Tuesday that he would get his judgment out as soon as possible, but needed to wait for paperwork from attorneys until Wednesday. Gentry said if the judge decides in favor of the state, he will immediately appeal to the state supreme court.