Nearly a hundred thousand Missourians are richer after collecting unclaimed property from the state. State Treasurer Clint Zweifel says he and his staff has returned $35 million to 92,000 Missourians. Both are record amounts.

State Treasurer Clint Zweifel says it’s been a priority since taking office in 2009 to get money and property back to Missourians that’s righfully theirs. 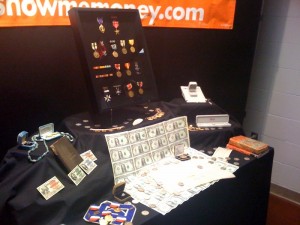 Zweifel says he believes his office’s efforts to make the process more accessible and more efficient have prompted more people to see if the the state is holding any assets that belongs to them, and he says the economy might have something to do with it as well.

Zweifel says he helped push legislation through that prevented military medals of honor from being auctioned off if their rightful owners could not be found. Now, if they can’t be returned to their owners or family members, they’re displayed in state museums for all to see.

A St. Louis area man found himself to be a richer man this year when he received the largest single return ever, $1.6 million.

Zweifel launched a paperless claims process. Missouri the fifth state to have implemented the service.

Go to Show Me Money to see if you have any property coming your way.