Twenty-six years after David Poenicke’s death due to an impaired driver, a sign has been installed on I-270 in Florissant. 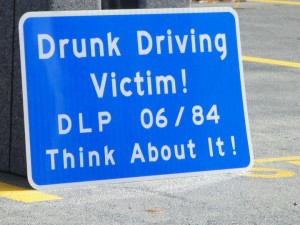 Missouri Department of Transporation Melissa Black says there are six other signs pending installation. Families of victims can submit an application to MoDOT have a sign installed in the memory of their loved ones killed by drunk drivers.

Black says the signs are not a cost to taxpayers, but do cost those memorializing loved ones about $600 for fabrication and installation.

Black says Poenicke had pulled his motorcycle over on the side of the road — after leaving a Cardinals’ game — when a drunk driver hit and killed him. The sign has been installed at that very spot.

The blue memorial signs read “Drunk Driving Victim” and include the victim’s initials and date they were killed. Under that, it reads “Think About It.”

Poenicke’s sister, Gail Rehme, was a leading force in getting legislation passed in the hopes that memorializing drunk driving victims like her brother would also help save lives. Rep. Bill Deeken (R-Jefferson City) sponsored the bill.

MoDOT reports that in 2009, 280 people were killed, 1,140 seriously injured and 3,719 received minor injuries in crashes involving an impaired driver.

Law enforcement reminds motorists that those who cause a fatal crash while intoxicated can be charged with involuntary manslaughter, a felony resulting in up to seven years of jail time, A $5,000 or both.