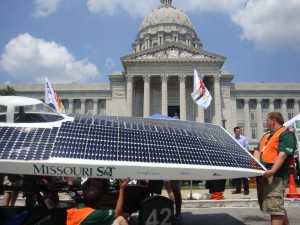 Missouri S&T's team re-charges in front of the Capitol

Traveling hundreds of miles on nothing but solar power, ten teams are making their way through Missouri in the 1,100 mile long American Solar Race Challenge. The Missourinet caught up with Missouri S&T’s team during a scheduled stop in Jefferson City.

As the “Solar Miner VII” made its way up the hill to the state Capitol, to become the fourth team to check in, the team of students got ready. Once it reached its spot in the circle drive, they lifted the top of the car off to let driver Jeremy Clemens from Branson out. He’d been behind the wheel for about six hours, but passed Stanford’s car on the leg of the race.

“We caught up one today, one position. I don’t know about time wise, but we caught one position. We had gone back and forth kind of the whole day,” Clemens said. 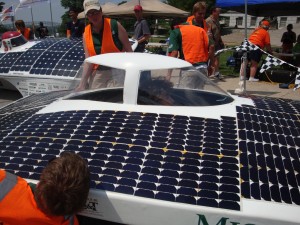 Clemens inside the car

It’s an estimated 10 degrees hotter inside the car than it is outside, on a humid day in the mid 90’s. The car is just a few inches off the ground; with no air conditioning, no wiggle room, and a hood covered with solar panels. Andrew Sourk of St. Joseph, the Head Mechanical Engineer for S&T’s team, says it designed for efficiency, not comfort.

“Pretty much he’s sitting on rigid carbon fiber plates. He has a little pad that we threw in in the last minute. The main only thing for comfort that we really did for comfort was I checked seating angle to make sure his legs wouldn’t go to sleep, and that’s about it,” Sourk said.

“It’s tough. You have to hang on, like, with both hands. But it’s pretty smooth,” Clemens said. 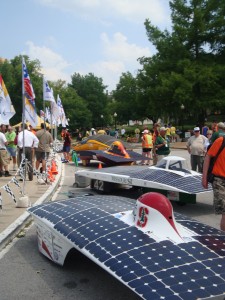 Stanford, Missouri S&T, Minnesota, and a team from Germany's cars lined up in front of the Capitol (reverse order of their arrival)

Missouri S&T is competing against teams from around the world in the race from Tulsa to Chicago. As the team lifts the top off of the car, 5 or 6 team members hold it up at an angle toward the sun, to charge the battery with the solar cells on top. Sourk says it’s the lightest car in the race, by about 100 pounds.

“We’re the only car, we make our body out of house insulation foam wrapped in Kevlar and carbon fiber and it makes it incredibly light, and yet still stiff enough that all it really has to do is push the wind out of the way and that’s what it does,” Sourk said

After the mandatory checkpoint in Jefferson City, Sourk says the light weight should be an advantage on the way to Rolla, through hilly sections of the state. He expects they’ll arrive there sometime Wednesday, and teams stay there until the next stage of the race starts Thursday.

So are these the cars of the future? 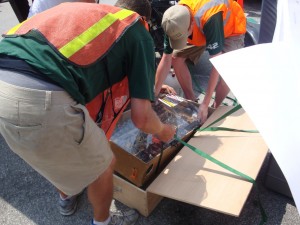 “You won’t really see solar powered cars, purely, on the road; simply because the cost is so high. But everything under the solar panels, so the optimization of the aerodynamics and weight. We make our own custom retractable brake calibers that have less break drag, high efficiency bearings, a lot of that. It’s teaching students how to be very, very efficient with their designs, so making cars more efficient,” Sourk said. He’s a second year graduate student.

S&T’s team leader Christina Jung agrees, the race is really all about collaboration and education. She says that’s evidenced in the fact that it really is a ‘friendly’ competition. She says that was obvious in some of the events leading up to the race. 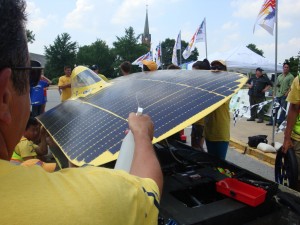 A member of Michigan's team squirts the panels with water, which helps during re-charging. Michigan is leading the race by a significant margin.

“There are some teams who had their car completely done, then other teams who don’t even have solar cells on it yet. You’ll see the teams who are done going out and helping the other teams getting their car done, giving them ideas. So yeah it’s a really cool atmosphere to be in I’m really enjoying it,” Jung said. She just graduated in May.

But that doesn’t mean the Miners don’t want to win. The school has won the race twice in the past. As of the Jefferson City checkpoint, the University of Michigan and a team from Germany were in first and second place. To follow the progress of the race, follow this link.