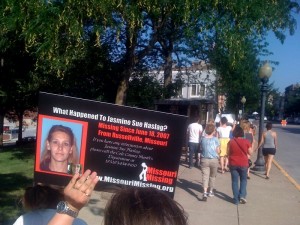 Missouri’s Official Missing and Unidentified Persons Awareness Day coincides with the 3-year anniversary of the day a woman went missing in Cole County.

A “memory walk” for Jasmine Haslag started from the State Capitol; a couple dozen people making their way through downtown Jefferson City. Jasmine’s mother, Peggy Florence, says the group “Missouri Missing” hopes to have a presence in the city.

“I think the state needs some laws that govern the way a missing persons case is handled. There’s different things we need to do, we need to be more organized, for one. Missouri Missing is basically for one family to reach out to another so they don’t have to be alone. We haven’t gotten really good at pushing around legislation or getting anything done,” Florence said.

Florence is one of the co-founders of Missouri Missing. She says she has hopes of hiring a lobbyist.

“We just don’t know how, haven’t figured out how to go about doing that yet. To have a missing loved one in your family, it just eliminates every… you have a good thought, but where it went, I don’t know,” Florence said.

“Have you seen her?” One man in the group yells toward the building.

“They’re gone!” Florence yells, both of them directing their frustration toward the Courthouse, where most of the employees have already left for the day.

Florence says she thinks days like these help the group get toward that goal of becoming more organized. Missouri Missing tries to make contact with families shortly after a person goes missing. But for many, this is the first chance to meet others who have gone through the same experiences.
Florence said a few words as some of those new acquaintances took part in a balloon launch for Jasmine.

“I have to say to Jasmine today that I love you Jasmine Sue, I love you and I always will,” Florence said.

This is the second official Missing and Unidentified Persons Awareness Day in Missouri. The walk came after a day of events at the Capitol.

One of the keynote speakers was the father of Shawn Hornbeck; the boy who was found alive in the St. Louis area years after he disappeared, a story that generated national attention. Marianne Asher-Chapman, the other co-founder of Missouri Missing, says that was a powerful speech.

“They definitely sent the message to not give up, because Shawn was found alive. But that’s not going to be the case in a lot of these cases,” said Asher-Chapman, whose daughter went missing 7 years ago. It was later discovered she was murdered.

She says while this is only the second time they’ve held this event, it appears similar groups around the country have also seen the potential in joining together for common causes.

“We were the first state in this country to include the unidentified in our awareness day, and since then two years ago, we’ve had seven other states follow our lead,” Asher-Chapman said. 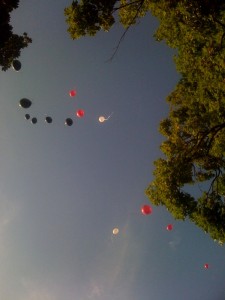