You are here: Home / Sports / Suppan gets support in first start since April 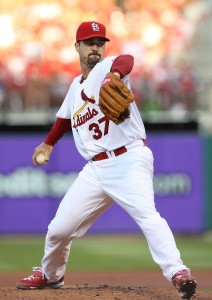 Jeff Suppan makes his return to the Cardinals. UPI/Bill Greenblatt

Jeff Suppan, making his first start since April 23rd tossed four innings and with the help of a couple of home runs and a strong bullpen, the Cardinals beat Seattle 4-2 on Tuesday night.

Suppan gave up just four hits and a run on a solo short from Milton Bradley. The Cardinals provided their own power as well. Down 1-0, Colby Rasmus helped give the Cards a 3-1 lead with a two run homer off of M’s starter Ryan Rowland-Smith. It was Rasmus’ 13th of the year. In the very next inning, Albert Pujols connected for his 15th of the year to make the score 4-1.

Seattle got a solo homer from Ryan Langerhans with one out in the ninth off Ryan Franklin. Franklin finished the game off for his 12th save giving the win to Blake Hawksworth who went an inning and two thirds after Suppan for the win.