About 16 guardsmen from the Army-National Guard‘s Aviation Battalion in Lebanon, Missouri are training to use a new piece of navigation equipment – the Army’s defense advanced global positioning system receiver. 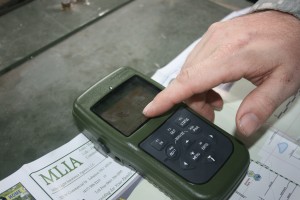 The guard says troops learned their lessons during Katrina that when regular navigation routes can’t be used, pairing old maps with new technology creates a fail-safe method of finding their way around.

It’s not like a Tom Tom, but it’s a little like a Garmin. Francis says the the military’s newest GPS equipment is comparable to those found on seafaring vessels. There’s no map, no voice telling them to “take a left turn.”

Francis says a unit can pre-plan meeting points — or waypoints on their GPS systems — so that they can all find a location, or each other, when all other communications systems fail.

Unlike a civilian GPS, instead of plotting routes to points of interest, it plots directions to grid locations on a map. Combined with the device’s built-in compass and a county map, the guardsmen, in four Humvees, traveled to a series of points.

“The whole reason we are doing this is to train for state emergency duty,” he says. “We can get coordinates through the Internet and our systems, so if we put together a convoy and have to go to St. Louis to help out with floods, then we’re going to use these devices.”

Not only will the device help the guardsmen get where they are going, but it can also act as a locator for any vehicles that get separated from a convoy.

“They would be able to tell us where they are at specifically, so that we can find them,” Francis says.

“The idea of any navigation is to put you as close as possible to the intent,” says Sgt. 1st Class Mark Halley. “You’re not going to be on a dime, but if it gets you reasonably close — within 100 yards — it’s a success.”

Because the data is all taken from satellites that are in constant motion in space, there is usually some slight variation on exact coordinates, he explains. 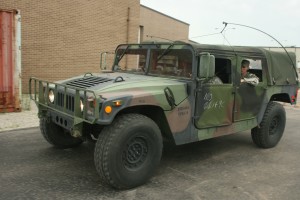 The Guardsmen first worked with the receivers, which can not only be used to navigate in vehicles, but also on foot, Monday morning in a classroom setting. After they went over the training manual, groups of Soldiers used the devices to plot points in walking distance around the armory before finding locations in the vehicles.

The unit plans to travel to Fort Leonard Wood to utilize what they’ve learned at the post’s land navigation course as part of their annual training.

Previous Post: « Making sense of the new Big 12 (PODCAST)
Next Post: MO Board of Education signs on to push for ‘common core standards’ (AUDIO) »