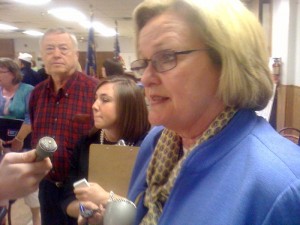 Senator McCaskill says she wants to see BP pay for every dime of the clean-up effort from the Gulf of Mexico oil spill, and doesn’t care if it drives the company out of business.

“They’ve got plenty of money. Now, they may go out of business, but I don’t care. They gotta pay for it, that’s the risk and the reward. They’ve had the reward, now they have to pay up on the risk part,” McCaskill said.

McCaskill tells a crowd at a Columbia town hall meeting that the cap on liability costs for oil companies doesn’t quite fit into the risk/reward system of free enterprise that major corporations usually cry out for.

“Give me a break. You can’t have it both ways. You can’t say get government out of the way, but then say when we do something wrong we want the government to say we don’t have to pay for all of it. So we are working to take the cap off of liability. There is a group of us that are working to do that, I urge you to contact the other members of the Missouri delegation in that regard,” McCaskill said.

McCaskill says she doesn’t buy the argument that the corporations need the incentives to stay in the U-S, saying the billions of dollars in profit the companies pull down every year is enough.

“The impact of this is horrific. This is a tragedy and I would like to make sure that the most important incentive they have is to do it right, do it carefully and do it safely,” McCaskill said.

Previous Post: « Missouri given a deadline from Big 12
Next Post: Bond says BP ignored warning signs, Obama failed to have a plan in place »