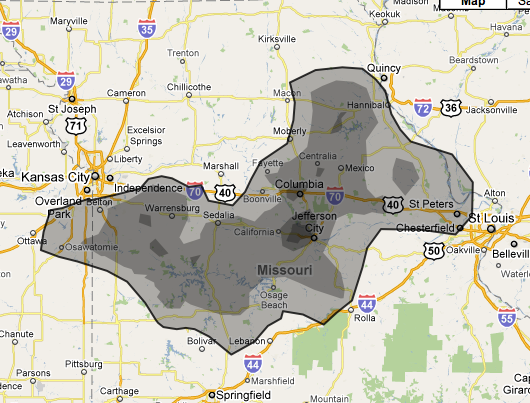 The National Oceanic and Atmospheric Administration has a website called “ifitwasmyhome.com” that lets people move the oil slick from the Gulf to their part of the country.  We’ve moved it so the center is in Jefferson City.  .

The spill would stretch from Ottawa, Kansas–west of Kansas City, south almost to Bolivar, spread to an area just north of Lebanon and Rolla and then to St. Louis County.  The northern part of the spill would generally follow Interstate 70 then swing north near Boonville, cover Fayette and Moberly, curve just east of Macon and almost reach Quincy, Illinois. It would cover Hannibal, almost reach to Alton, Illinoios, and then drop south to cover St. Peters and Chesterfield.

The BP oil spill has pumped an estimated 45-millino gallons of oil into the Gulf of Mexico since April 20th.